So far, I've reminisced on and recommended some pretty fantastic places in New Orleans to enjoy lunch and dinner. There's even more food though, that I absolutely have to fill you in on. The first would fall into the snack (or dessert, or breakfast) category, while the second is definitely a notorious location for brunch. 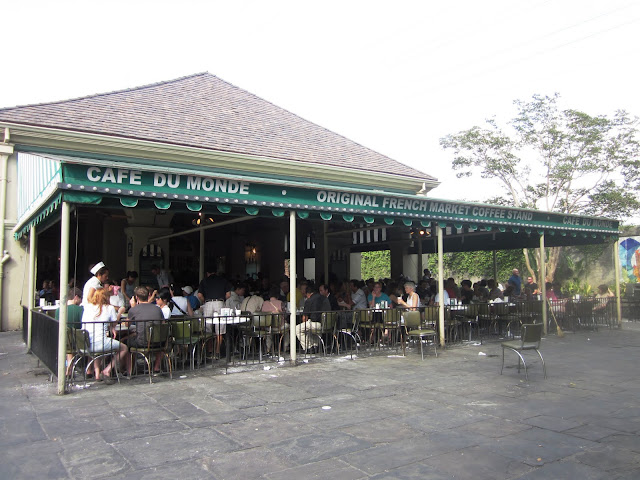 One thing everyone recommends you do while in New Orleans is visit Café du Monde. A quintessential city landmark, the original French Market Coffee stand has been around since 1862. 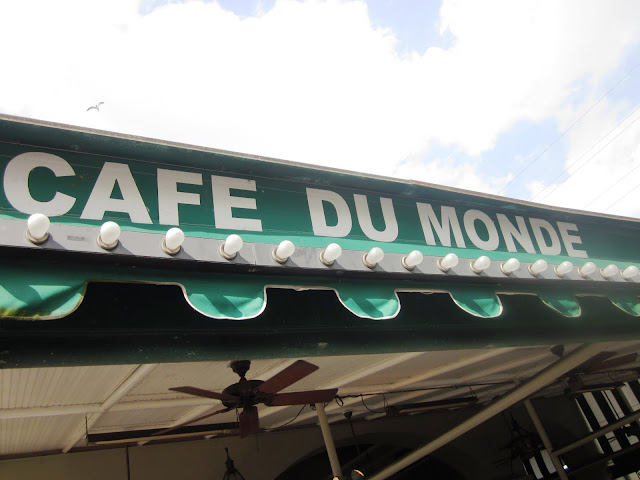 It may look unkempt and crowded, it will probably take you ten minutes to figure out who your server is, then another ten to flag her down, but the end result is oh so worth it after just one bite of the Beignets and a sip of Café Au Lait. 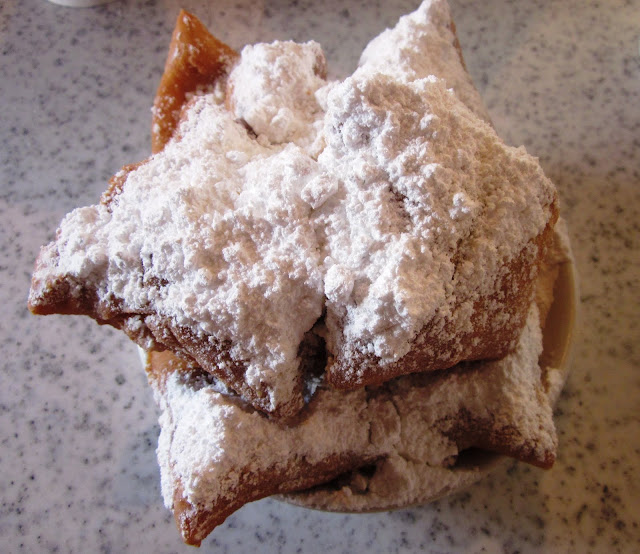 You've had beignets, but you've never really had beignets unless you've had one here. At least, that is how I felt once I tasted Café du Monde's. A thick piece of dough roughly shaped like a square is fried to obtain a just barely crisp golden exterior, the inside remaining warm and soft. 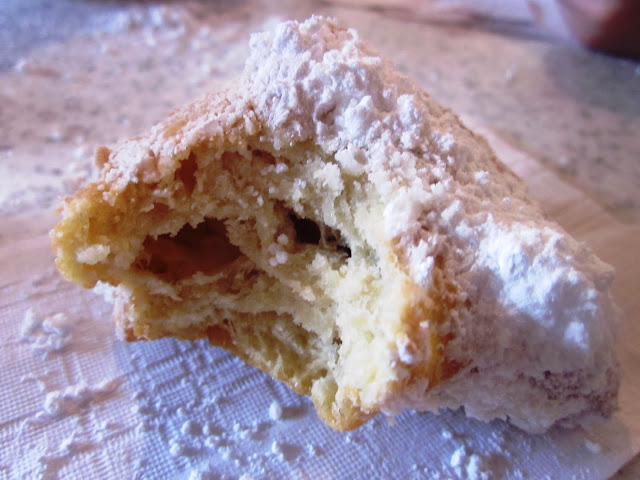 Pillows of fluffy dough cascading with hills upon moutains of powdered sugar are reminiscent of a doughnut on one hand, fried dough on the other. They are a seriously indulgent afternoon snack, or breakfast, or late night eat (they are open 24 hours a day, seven days a week.) 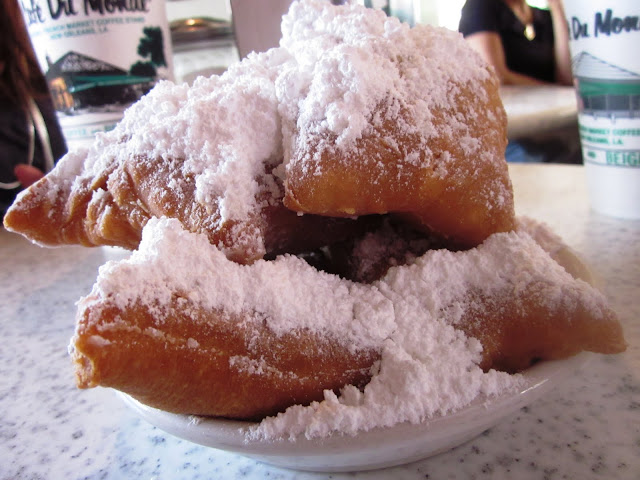 While we were here I drank a Café Au Lait. Yes, it was 70 some odd degrees out, but I couldn't pass on French tradition. 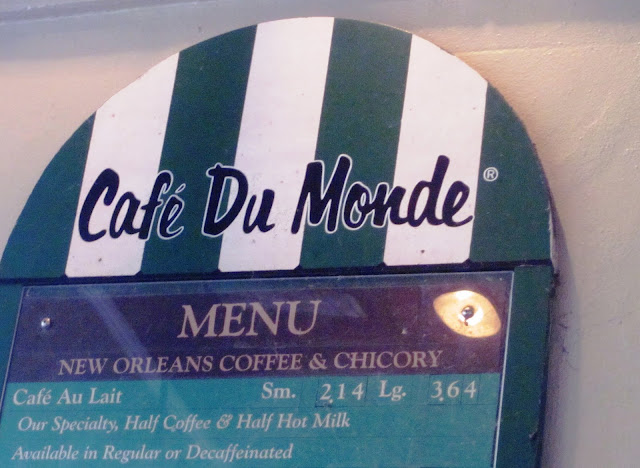 To their dark roasted coffee they add Chicory (the root of the endive plant.) After reading the history on the website I discovered the reason why - 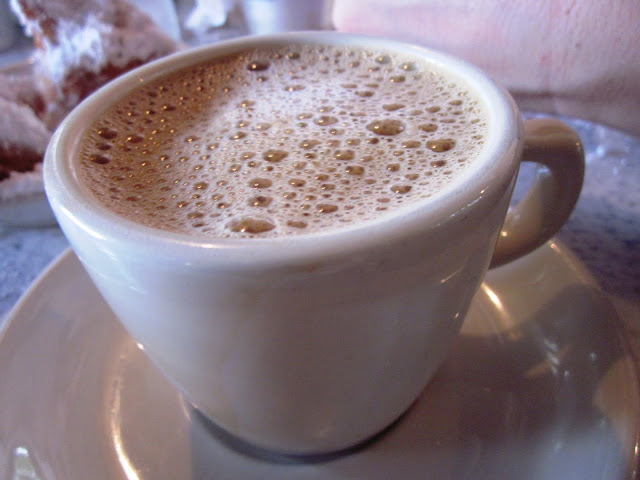 During the French civil war coffee was scarce and they found that chicory added body and flavor to the brew. The Acadians from Nova Scotia brought this taste and many other french customs (heritage) to Louisiana. 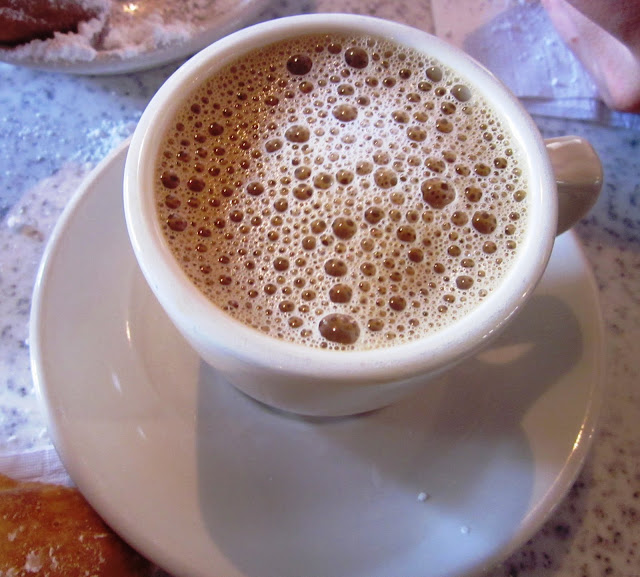 The Chicory is roasted and ground not unlike the coffee beans, adding a smooth counterpart to the coffees bitter edge. When you mix in hot milk for a Café Au Lait you have a creamy and frothy treat that remains rich, robust, and slightly sweet without the addition of any sugar. 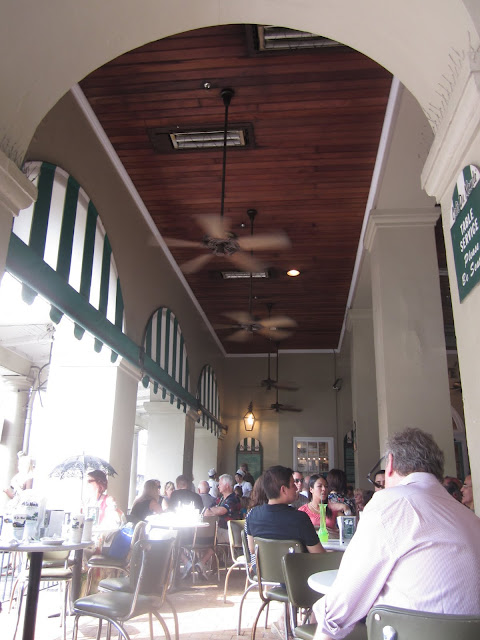 Café Au Lait is a perfect compliment to the Beignets, even in the heat. Serving these and pretty much only these two items (you do have the option to get your coffee iced) Café Du Monde is situated just across from Jackson Square (below) at 813 Decatur Street. 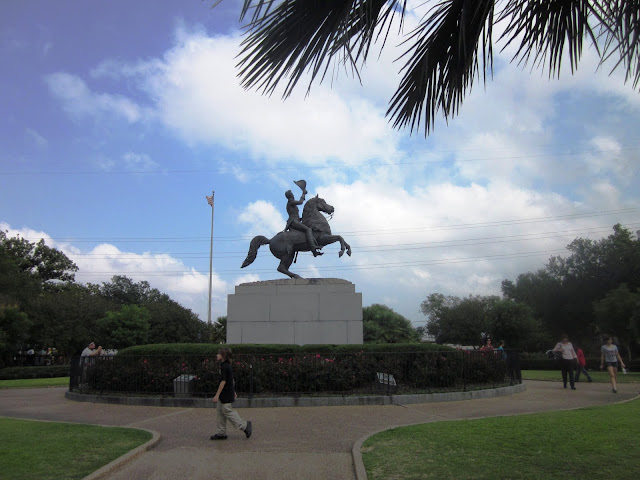 Brunch at Brennan's, should you choose to indulge, is also a very noteworthy and memorable experience. Located on Rue Royale which runs parallel to Bourbon, in between fancy antique stores and flawless balconies, it feels light years away from the tourist hoopla and neon lit signs. 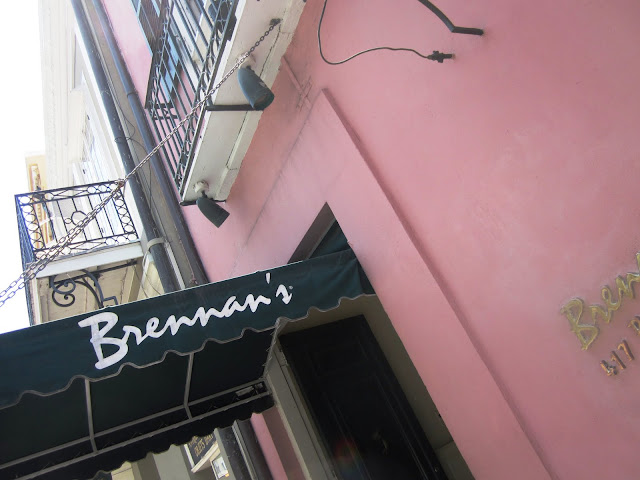 Rue Royale, a shopping haven which we explored on a separate occasion, also feels remarkably clean. Safe to say, in certain moments this section of the French Quarter actually transported me to Paris. (I know, being in the French Quarter and all you would think that's quite obvious, but not necessarily so.) 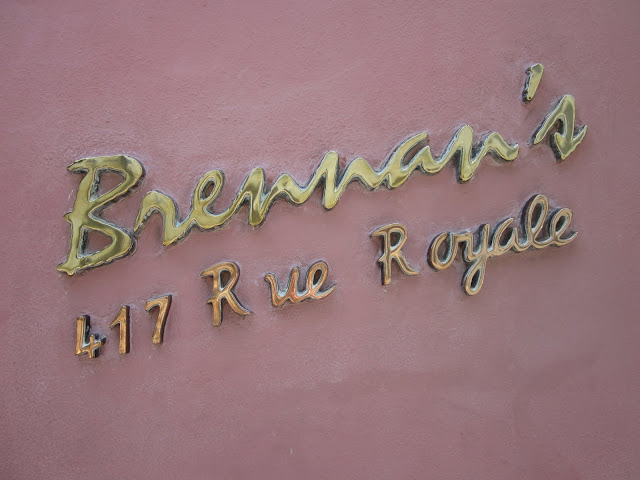 Brennan's also serves lunch and dinner, but, everyone highly recommends the first meal of the day be eaten here and after doing so, I can see just why that is. 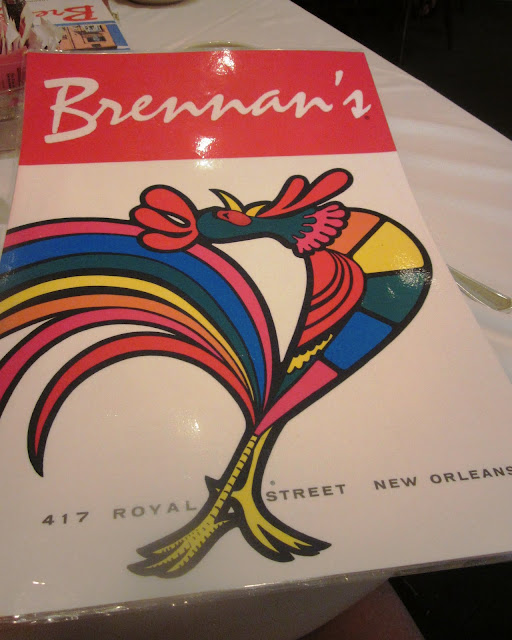 We were greeted right away by a cheerful hostess who let us know there would be a short wait and directed us to hang outside in the courtyard. Amidst the streaming sunlight, vine covered brick walls and exotic greenery sat a turtle pond. We had the bar at our disposal as well, however, water was all I could manage at this point in the day. 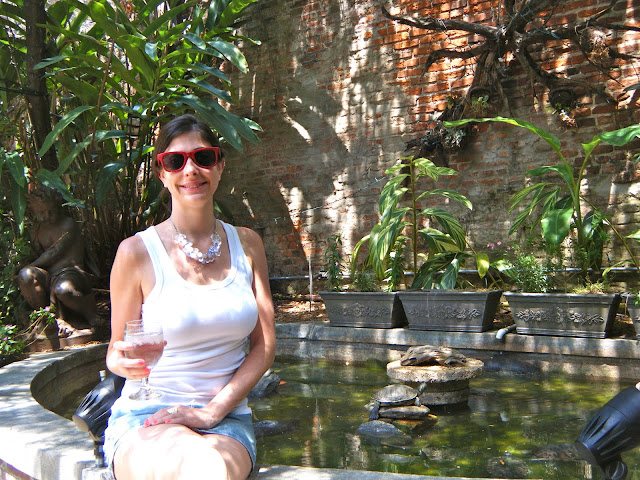 And some coffee once we were seated. 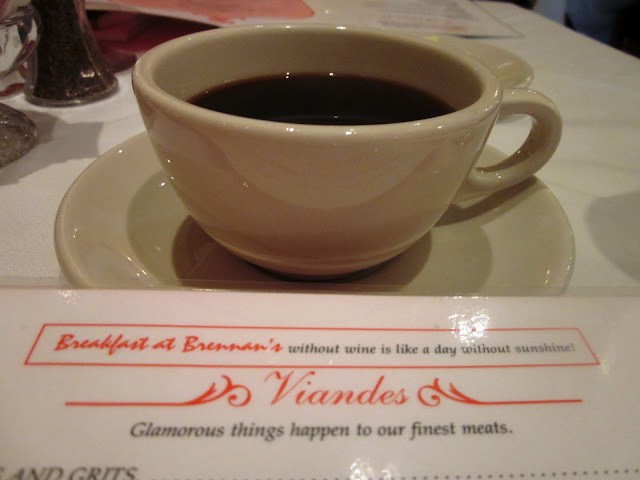 Exuding class and elegance, embodying a leisurely old world aristocratic tradition, they offer a serious three course prix fix brunch menu. For $36 (holy expensive - and that does not include your $6 cup of coffee) this southern soul food breakfast which typically begins with a baked apple and ends with their world famous Bananas Foster, was one I could not pass up. 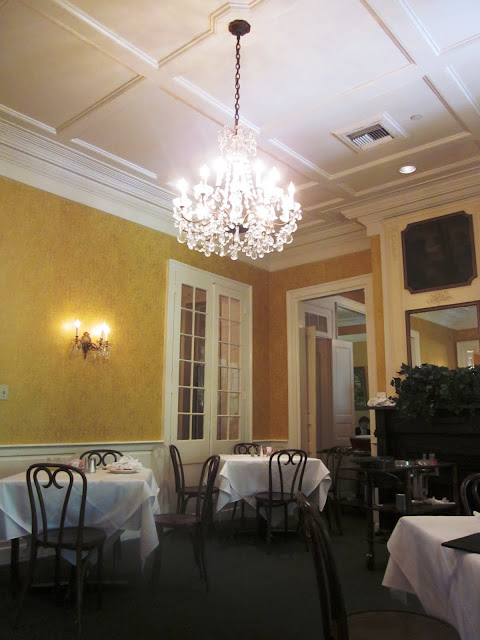 Under twinkling chandeliers hanging from high ceilings surrounded by golden yellow papered walls, we stuffed our faces in the most leisurely way possible. 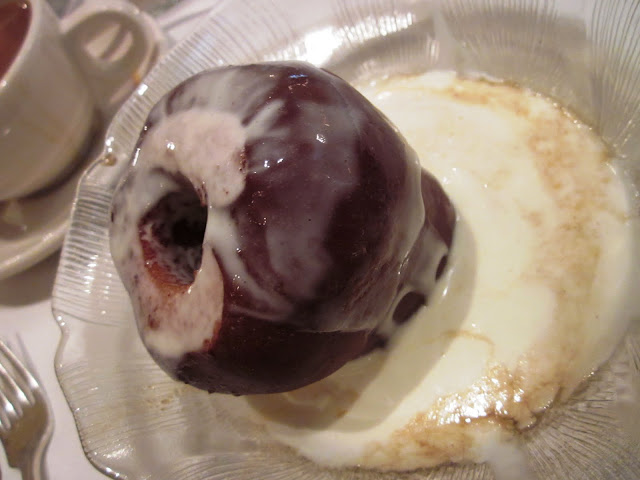 The Southern Baked Apple with Cream was incredible. Never in my life and probably never again unless I come back to Brennan's...(I guess you never know) have I tasted anything quite like it. The apple was soft set, baked to a deep brown, served in a bowl of double cream that mingled with sweet brown sugar to form a warm glaze. Where else can you get away with eating spoon fulls of sweet, sugary cream for breakfast? Yep, thought so. 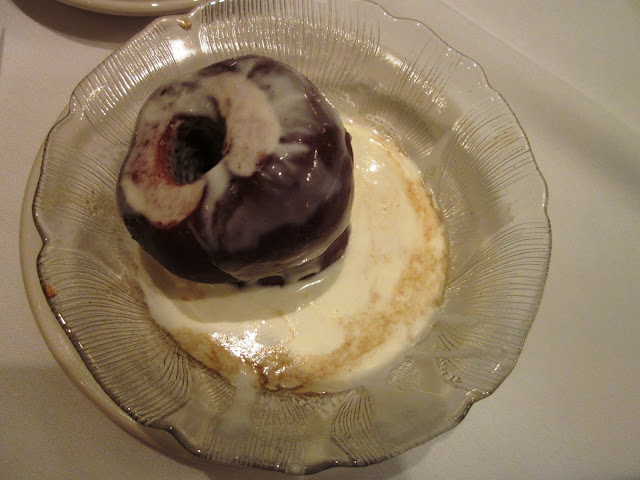 This was bliss. I'll admit I was struggling big time (it was Sunday at this point, and we've had three very late nights...) but forget the hangover for a minute, I've got a second course of Eggs Portuguese to put down. 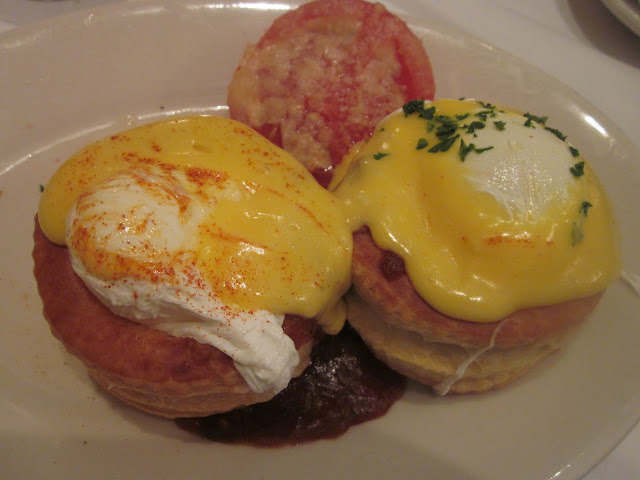 Flaky pastry shells are filled with freshly chopped tomatoes sautéed in butter with parsley and shallots. 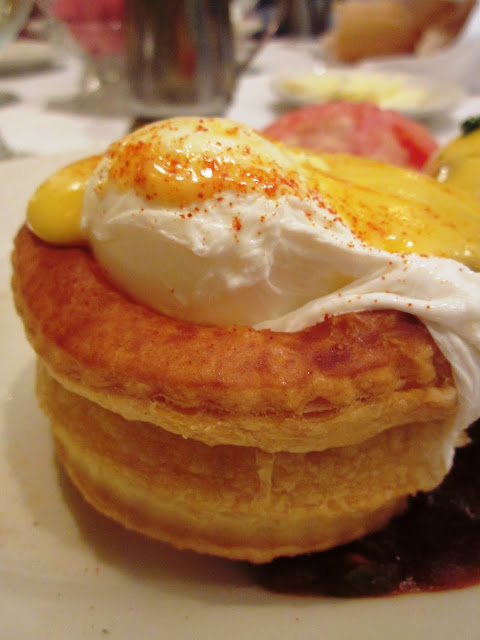 Then topped with two perfectly poached eggs and covered in Hollandaise sauce. 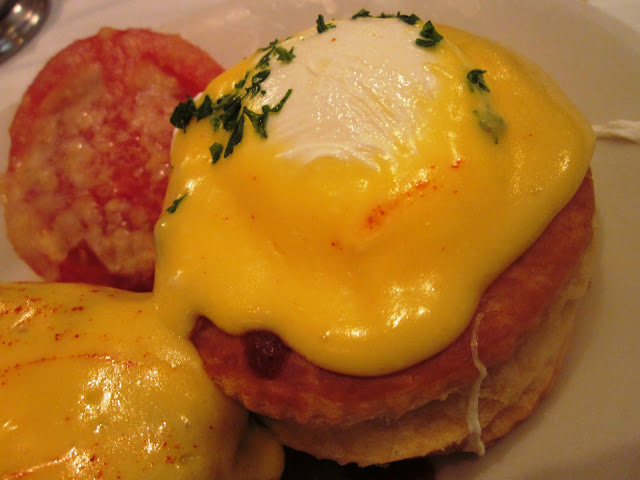 Obviously reminiscent of my favorite brunch entree - what else but Eggs Benedict; this was a comforting dish with a new sense of appeal. I barely had it in me for another course after this. Being that I went with the prix fix, dessert was coming whether I was ready or not. Bananas Foster is an original Brennan's creation and now a World-famous dessert. The story of origin should it be of interest, is paraphrased from the website and pasted below. 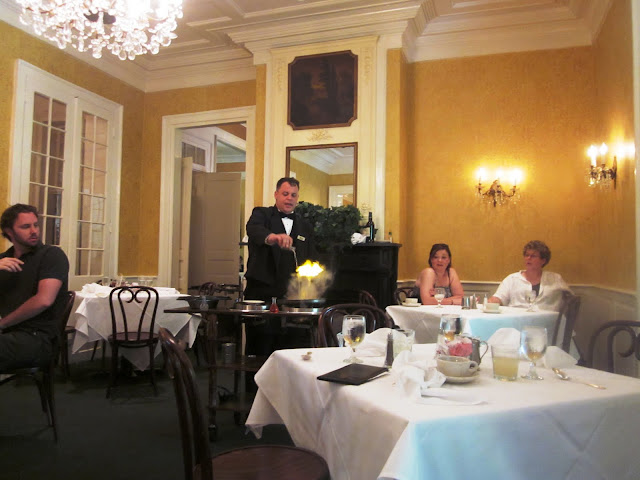 In the 1950's, New Orleans was the major port of entry for bananas shipped from Central and South America. Owen Brennan challenged his talented chef, Paul Blangé, to include bananas in a new culinary creation - Owen's way of promoting the imported fruit. Chef Paul created Bananas Foster. The scrumptious dessert was named for Richard Foster who was a frequent customer of Brennan's and a very good friend of Owen. 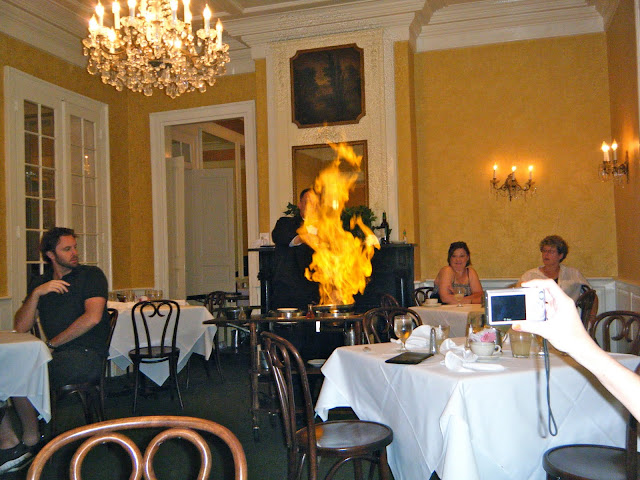 His creation boasting bananas sauteed in butter, brown sugar, cinnamon and banana liqueur, then flamed in rum and served over vanilla ice cream is nothing short of outstanding. 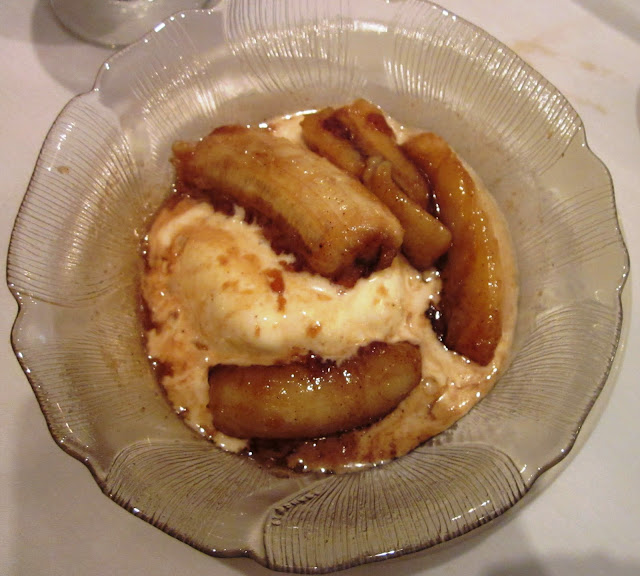 Why did I come home again?