Presenting El Rey de la Gamba or as it translates in English, The King of Prawns; the Catalan seafood restaurant which officially wraps Barcelona cuisine week here on III. The open air terrace where rows of white linen table cloths and metal chairs backed by red fabric sit under a large tent is located on Passeig de Joan de Borbó which borders the harbor of Barceloneta. 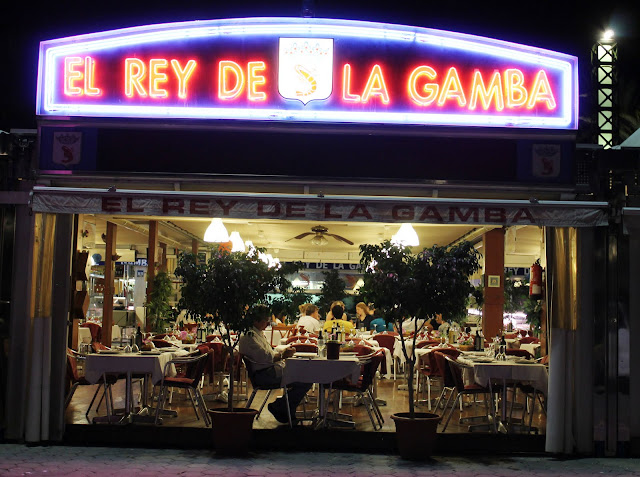 The trip certainly wouldn't have been complete from a culinary perspective if we didn't get ourselves some traditional Seafood Paella! While pretty much every other restaurant on Las Ramblas serves this dish, which embodies a serious mass touristic appeal, we had a couple spots in mind in the Barceloneta neighborhood and were hopeful to get a really good batch! 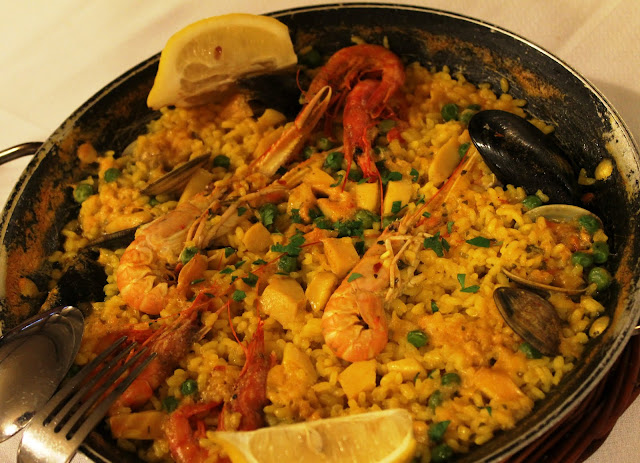 This restaurant ended up being a spontaneous choice. That night we had some minor issues with our map (the road we needed to find was not on it), got lost in a sketchy 'hood (the type of spot we did not want to look lost) before ending up on Barceloneta's main drag, starving and a little defeated. 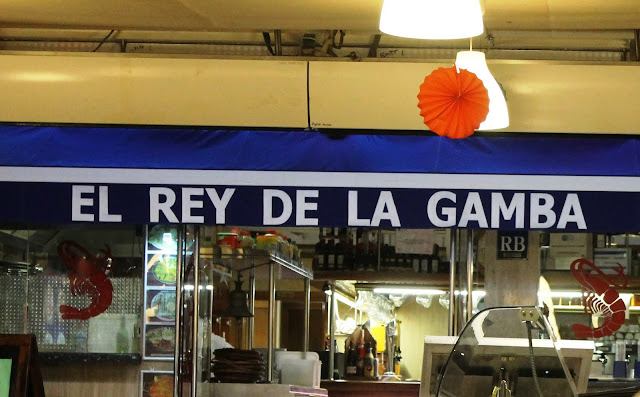 El Rey's location, beckoning neon sign and giant seafood posters indicated a tourist trap, but we decided to go for it.

Our disingenuous waiter had a friendliness that felt forced, which might not have been so bad if it was consistent! Other times he seemed to be annoyed by our presence, and his attitude was rather lethargic. 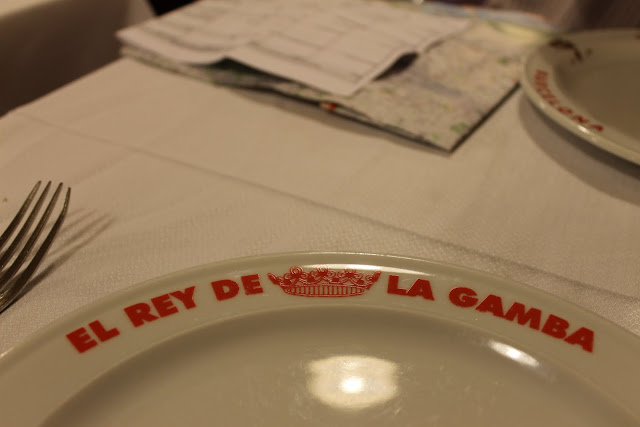 That being said, we still managed to get cold beers and hot food in a respectable time frame! 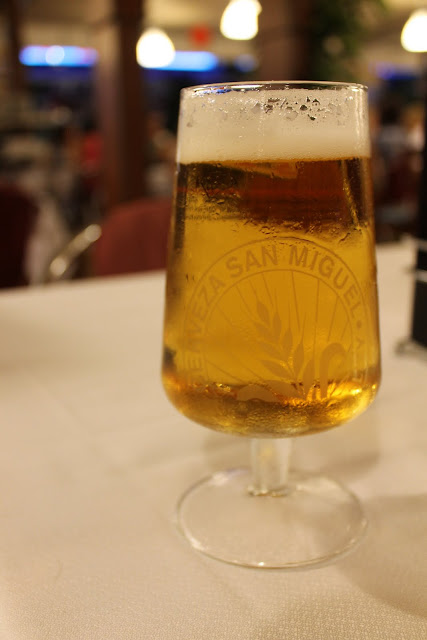 The iconic Catalan tapas to begin the meal, Pa amb tomàquet was essential, per usual. The fresh tomato and fruity olive oil punctuates so perfectly each crevice of the hearty bread. 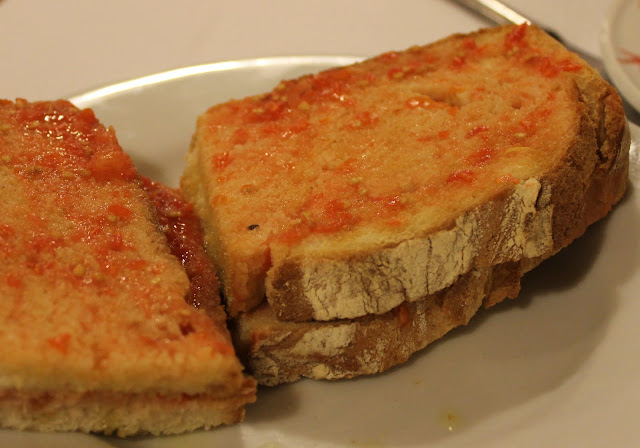 Gosh I love this stuff. (Or couldn't you tell?) I've been eating it by the plateful! When in Spain.... 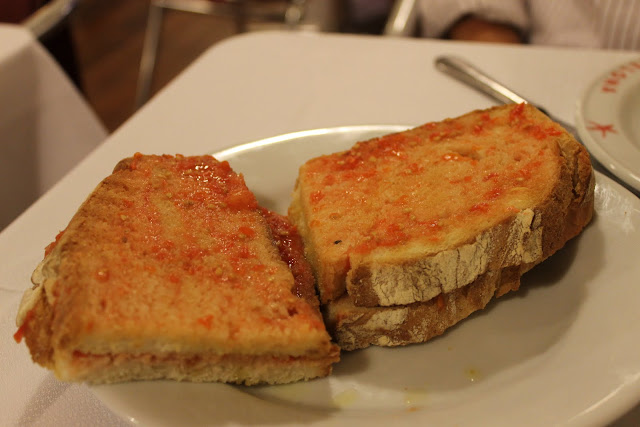 And then came the piece de resistance, a ginormous pan of Seafood Paella with paprika and saffron infused rice, studded with bright green peas and soft set mini potatoes, dusted in fresh parsley and served with lemon wedges. 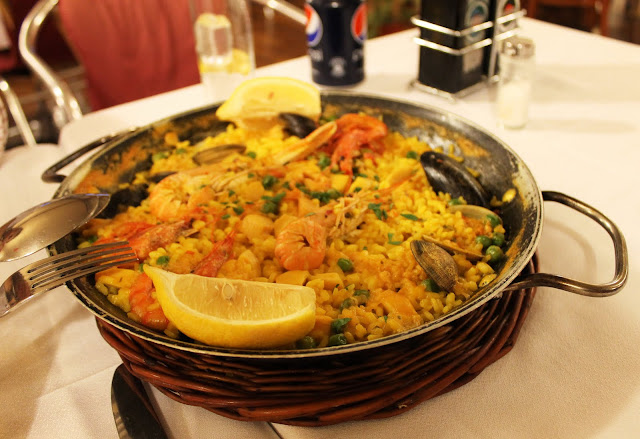 The bomba rice was wonderfully flavored and executed to a perfect tenderness. Its liquid absorbing capabilities are what make it ideal for paella, the grains expand substantially to become fluffy without being sticky. The bottom layer becomes slightly toasted, adding a welcome textural contrast. 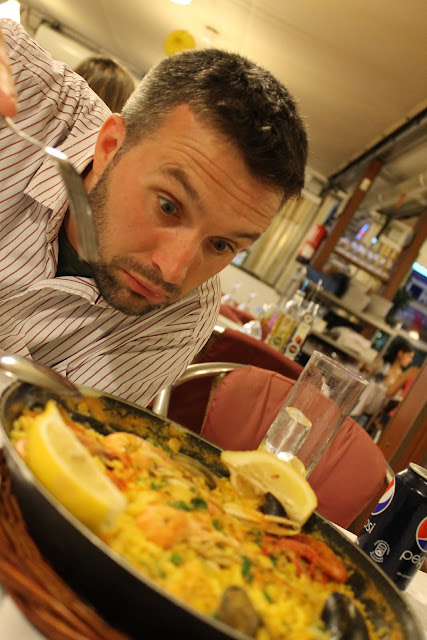 Admittedly, I felt the seafood could have been a little more substantial. The mussels freshness paled in compared to the plate we had at Tapas 24. However, we were still delighted by the pan of food overall. We relished the experience, savoring every tender shrimp, juicy prawn and briny clam. 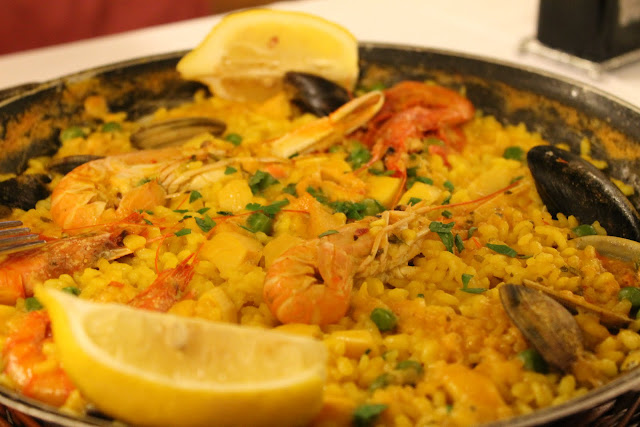 I wouldn't peg El Rey de la Gamba as a restaurant you must visit, especially since you can get paella almost anywhere. However, for us, it was simply meant to be! Definitely do some research, have a trustworthy map on hand, and whatever you do, don't miss out on this iconic seafood and rice dish if you travel to Barcelona! 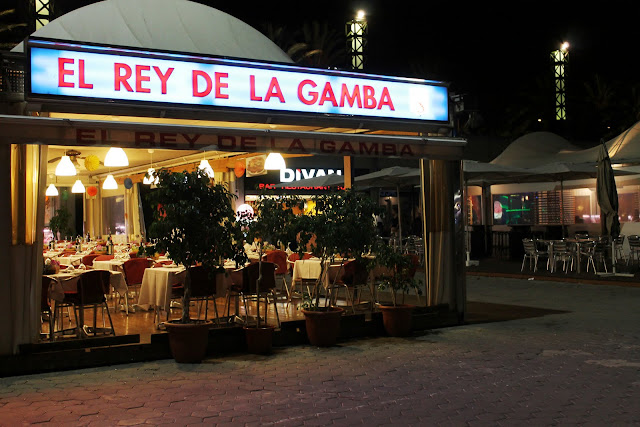 Well my friends, this officially wraps Barcelona cuisine week; what a delicious journey it has been! I plan to incorporate a couple of fun photo montage posts of the city sights before saying goodbye, and then, it's onward to the final destination of the trip, San Sebastian!