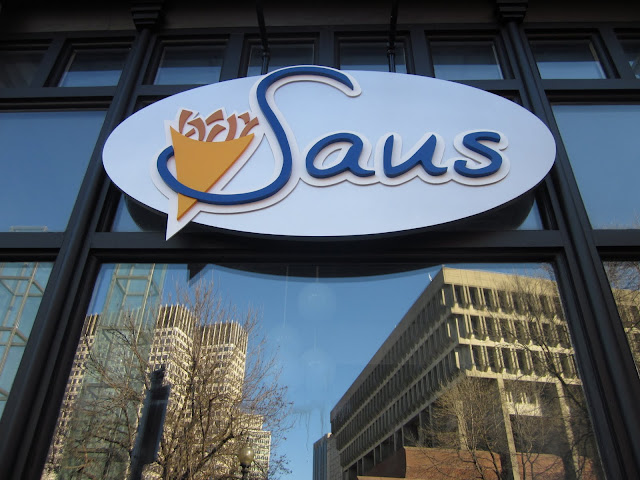 Run by a trio of young entrepreneurs Chin, Tanya and Renee, the three became friends while working at a Software company in the nearby Financial District. A conversation about how no such restaurant existed to satisfy their lunchtime cravings back in November 2008, and so humbly began the road to opening their authentic Belgian street food meets Boston neighborhood cafe. 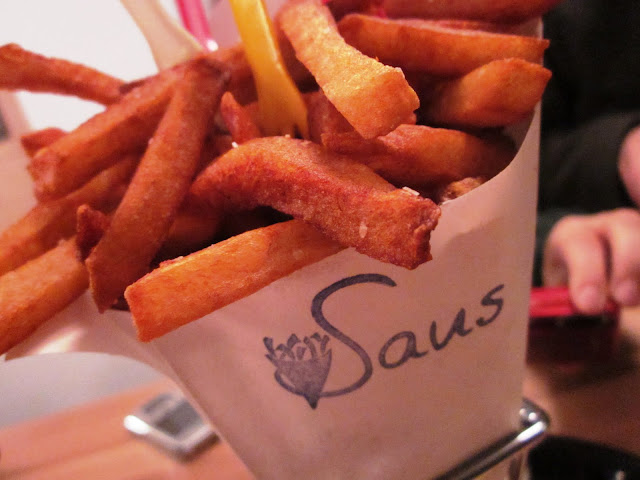 All the food is homemade from scratch - from the meticulous day long process of peeling and cutting the potatoes, to the ketchup and the mayo, to the stock in their poutine gravy. 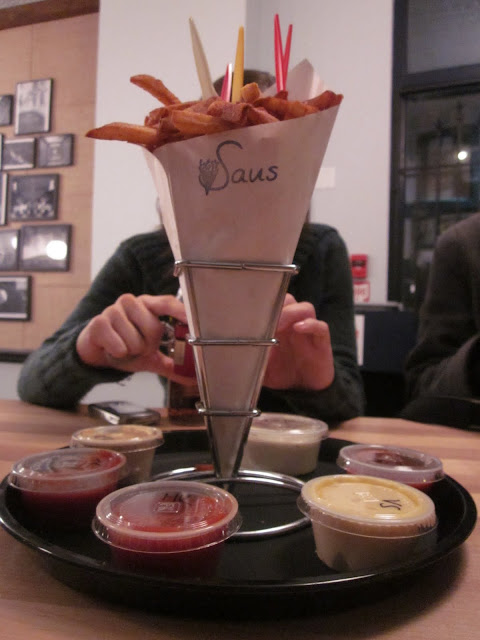 So now that we've got the basics covered, are you ready to snack like the Belgians?! 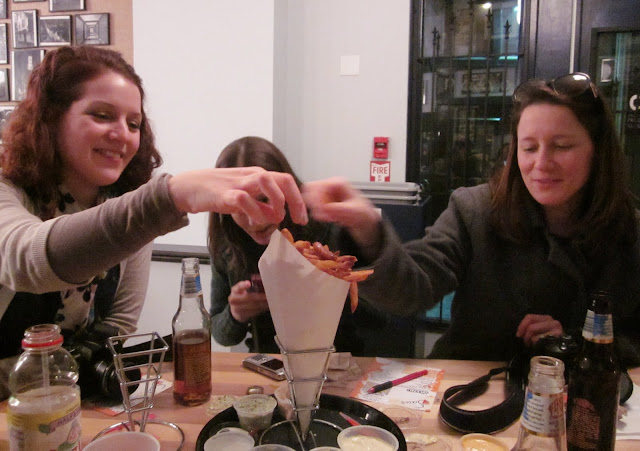 Megan, Michelle, Lizzy, Meghan, Bianca, Bridget, Rachel, Elizabeth and I certainly were. We gathered last Thursday, just two days after the grand opening to enjoy a complimentary tasting at the historic Freedom Trail location inside the old Yankee Publishing Building. 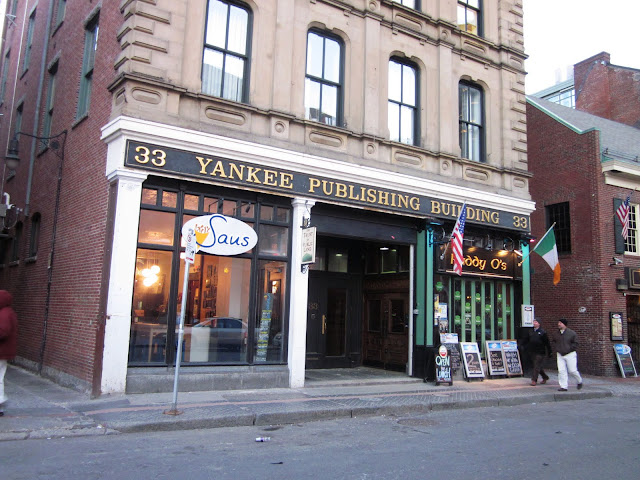 Right in between the strip of notably rowdy Faneuil Hall bars, late-night snacking won't know what hit it! (They are open until midnight Monday-Thursday and until 2am on Friday and Saturday.) But even better in my opinion is french fries for lunch or dinner and waffles for dessert, enjoyed in the company of friends. 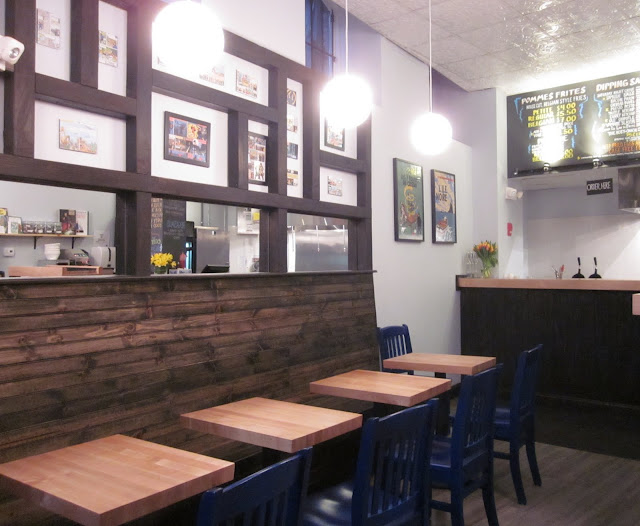 Gathered around a high top table sitting in newly painted royal blue stools surrounded by a hodge-podge of framed comic strips, the vibe is fresh and the feel is modern without being trendy. Familiar tracks from Vampire Weekends second album Contra play in the background. 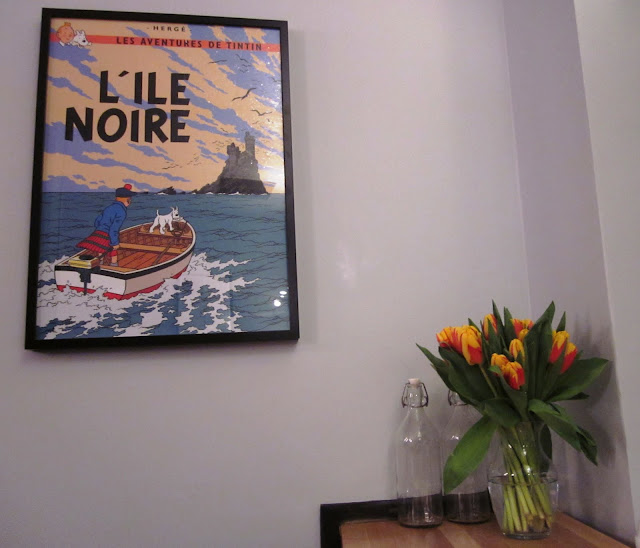 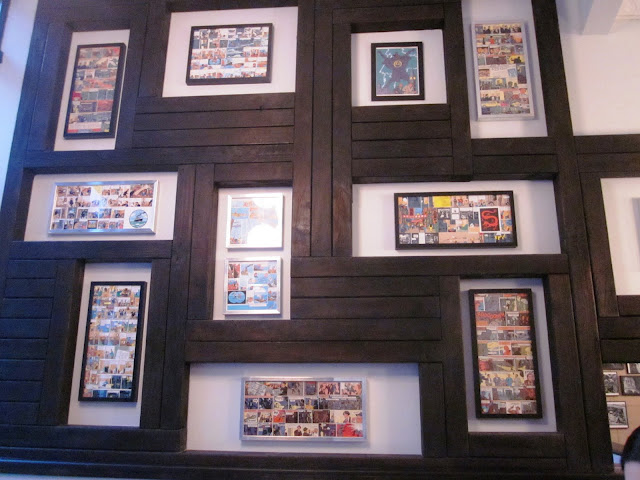 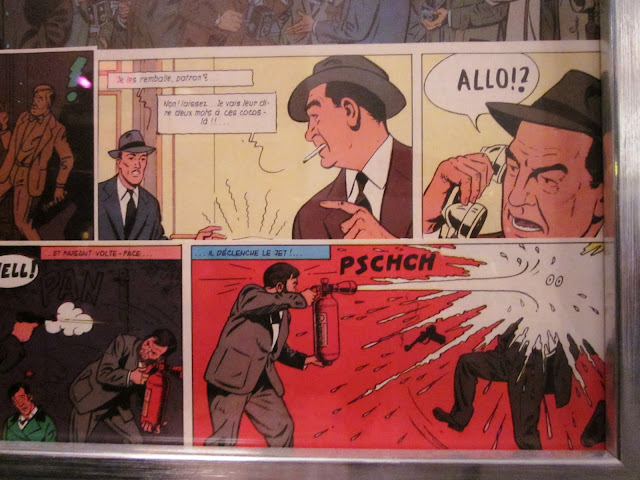 I ordered a Virgil's Cream Soda ($2.25) to wash down the highly anticipated fries. 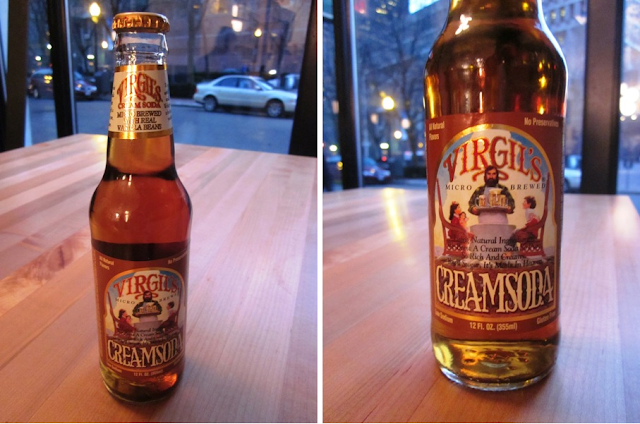 Cones of golden brown strands, deep fried and crispy, piping hot and addictive were served along side every single dipping sauce that Saus has to offer. 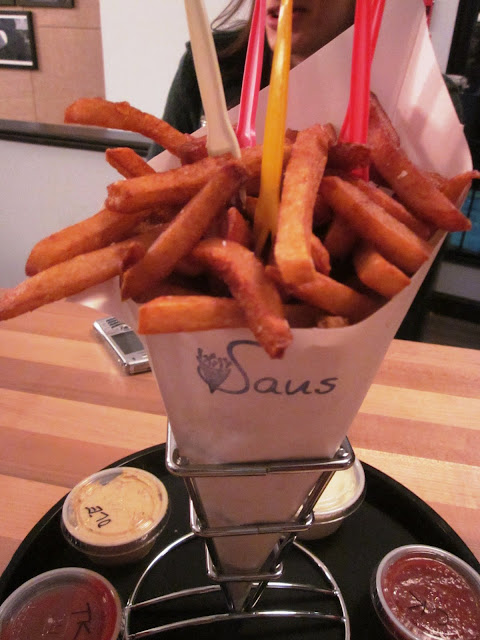 The owners truly spoiled us. And once we finished the first two baskets of fries, they brought more. 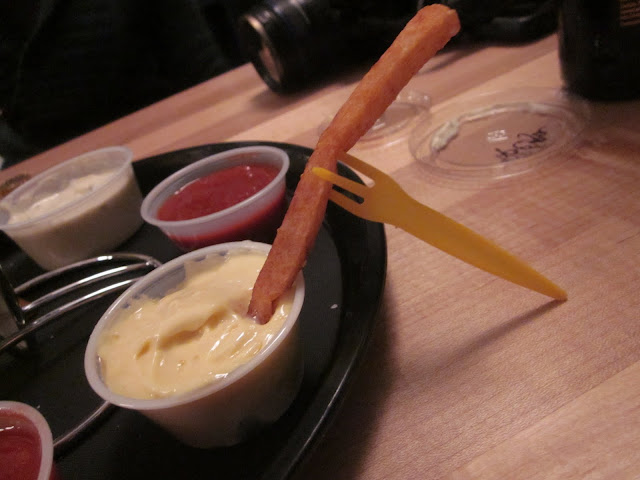 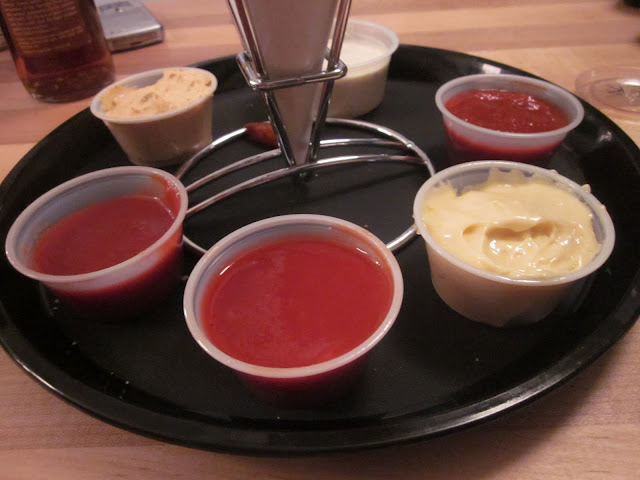 Creatively named and equally as tasty, Chin explained the signature flavors "go-big" because if you like a certain ingredient, naturally you are going to want more of it. 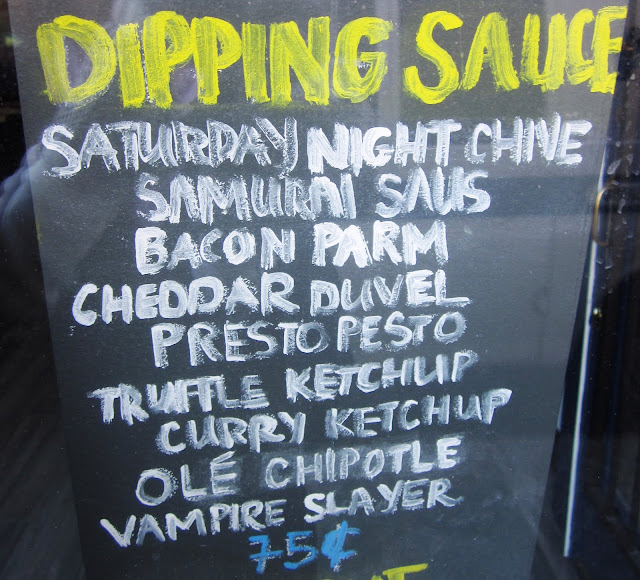 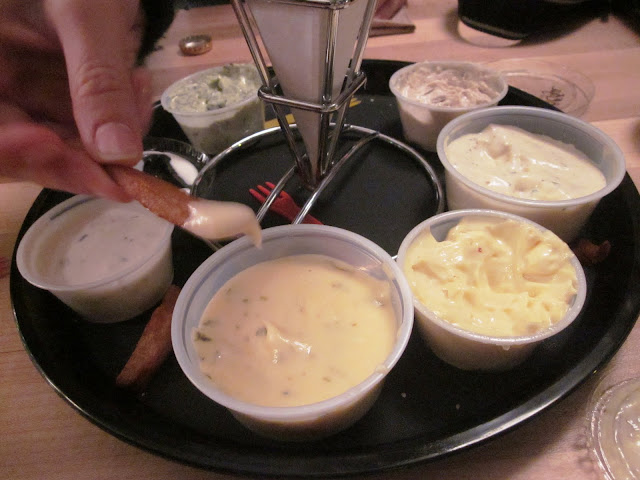 One of my favorites was the Vampire Slayer, a roasted-garlic-infused mayo. 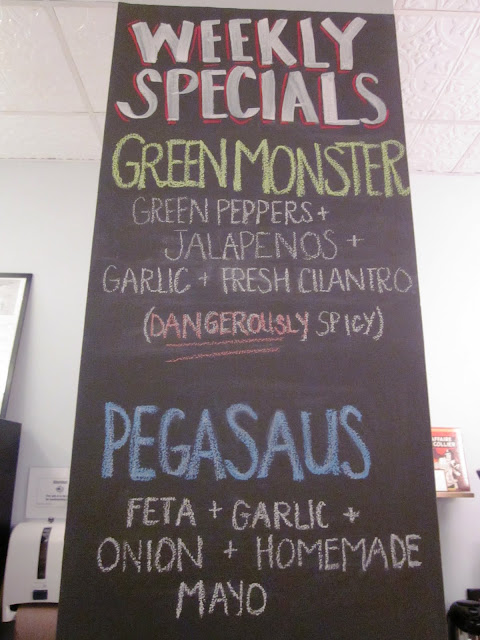 In addition to the standard sauce menu, they have a rotating menu of weekly specials. I tended to gravitate towards the sauces with a kick and the appropriately named Green Monster with green peppers, garlic, cilantro and jalapeños most certainly brought some heat. So did the Ole Chipoltle. But just as gravitating is anything made with beer, and so the Cheddar Duvel was a sauce I also returned to for many more dips. The Pommes Frites come in three reasonably priced sizes: Petit ($4.00), Regular ($5.50) and Belgian ($7.00). The individual sauces will set you back a mere 75 cents each. 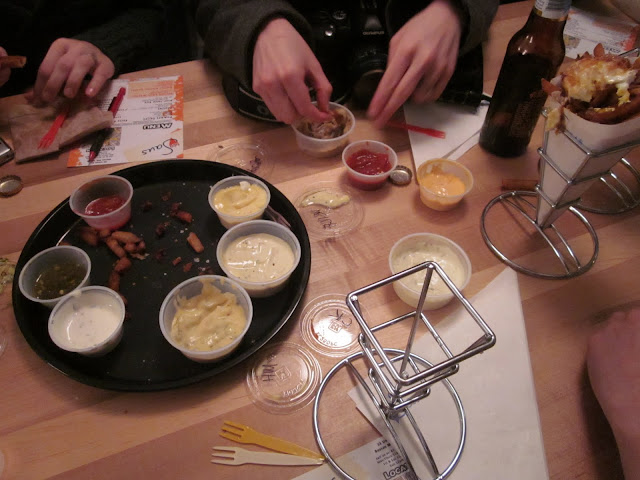 We grew intrigued by the Deep Fried Egg and Chin happily agreed to send one over. 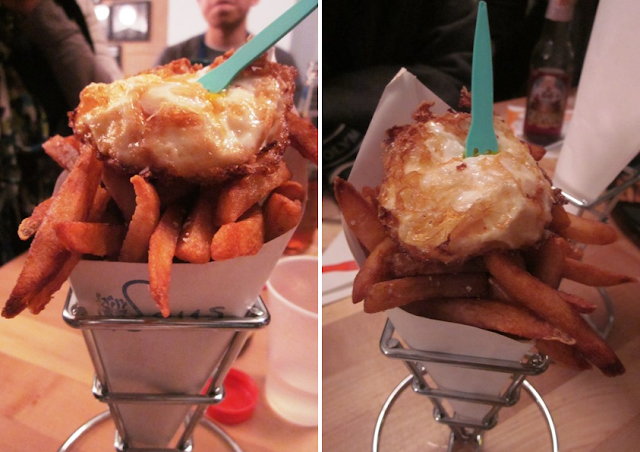 With a runny yolk at its core, it seeped over the fries giving them a breakfast like quality that we all agreed would compliment a hangover quite nicely. And for the grand finale, Renee presented us with Liege-style waffles. 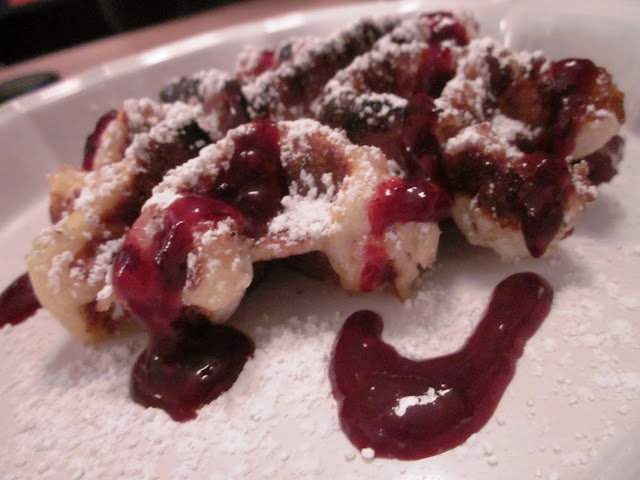 One of each served topped in yet another dose of signature sauces, this time of the sweet variety finished with a dusting of powdered sugar. 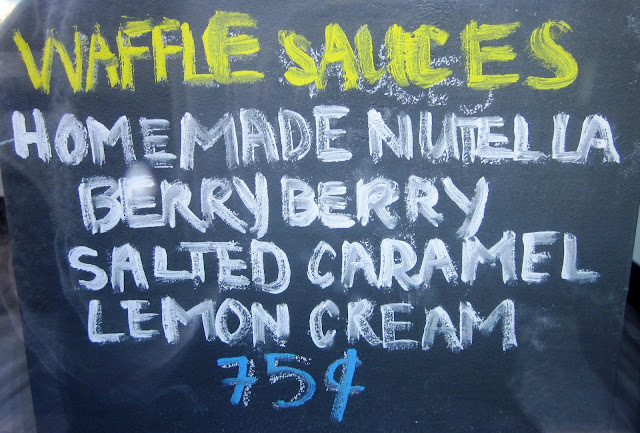 Prepared like dough as opposed to batter these waffles are rich and dense. Crystals of pearl sugar are infused lending a crunchy texture and a balanced but not overpowering sweetness. 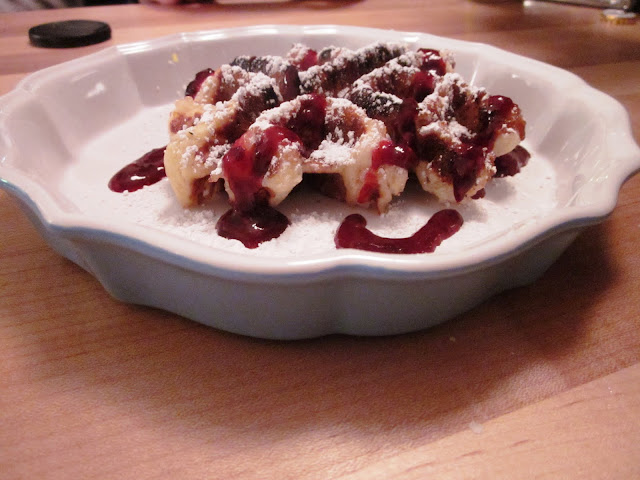 First up was the Berry Berry - vivid and tart! 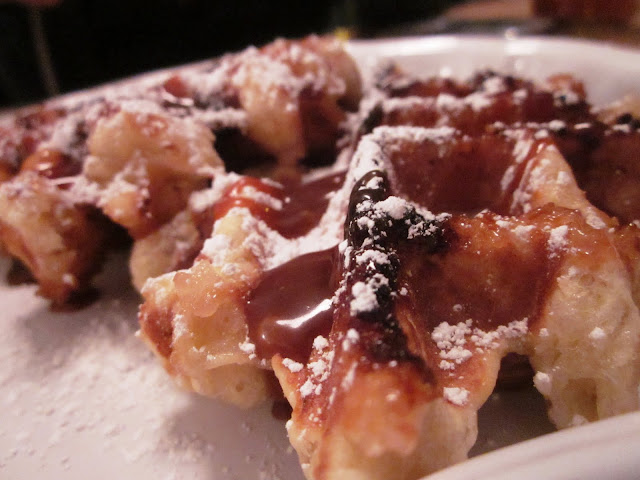 Second to be delivered were not one but two of the waffles coated in the Salted Caramel - gooey and rich, where sweet meets savory. 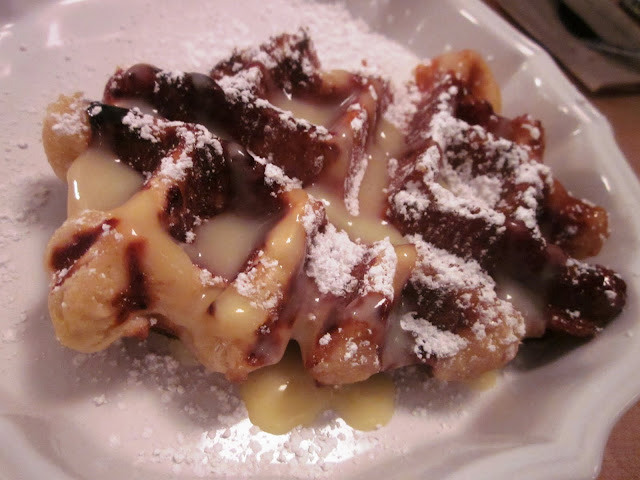 Lastly the Lemon Cream - bright and luscious! The Homemade Nutella sauce recipe is still being perfected, so we didn't get to try that one just yet! 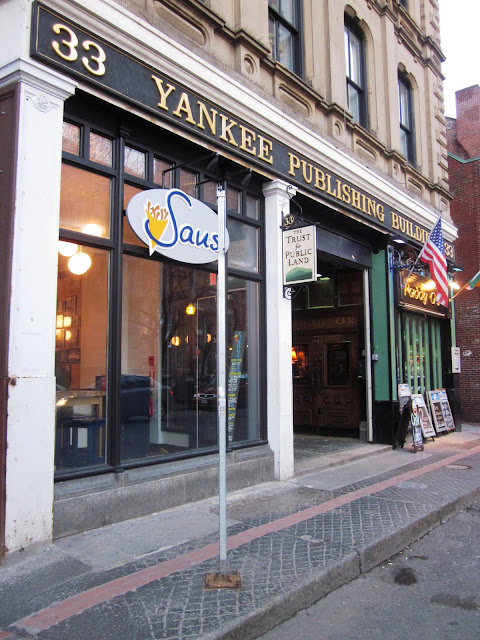 Pretty Fly For a French Fry, I'd say the back of Renee's shirt sumed up our collective thoughts. Head to Saus at 33 Union Street to satisfy your inner Belgian street food cravings. If you didn't have one before, hopefully you do now!